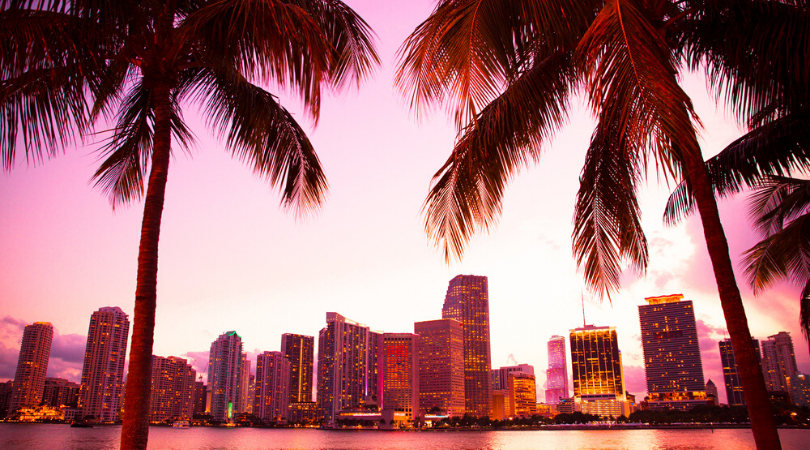 You can find quality marijuana dispensaries all over the Miami-Dade area. However, North Miami is particularly thriving when it comes to marijuana. While it’s just 10 minutes away from Miami, North Miami offers extra choices to medical users who need marijuana. It’s also full of beaches, parks, and activities, making it a prime spot for tourists and residents.

Many of the big dispensary chains have physical locations in North Miami. You can find dispensaries from Trulieve, FLUENT, GrowHealthy, Liberty Health Sciences, and RISE Dispensaries all within this area. You can also find plenty of dispensaries in nearby cities such as Miami and Fort Lauderdale.

On top of being a prime spot for medical marijuana, possession of weed for non-medical users is also decriminalized in Miami-Dade county. In 2015, it was announced that only civil citations and a $100 fine would be issued for the possession of 20 grams of pot or loss.

In Deerfield Beach, you can find various popular dispensaries including VidaCann, RISE Dispensaries, Trulieve, Curaleaf, Surterra Wellness, MuV, and GrowHealthy. All of these dispensaries offer a range of quality products for medical users, so you’ll never be short on options.

What’s more, with a lack of dispensaries in nearby cities such as Pompano Beach, Fort Lauderdale, and Boca Raton, Deerfield Beach is a great area for medical marijuana patients in surrounding areas. Along with plenty of locations for marijuana, Deerfield Beach is also known for its beautiful parks and clean, environmentally-safe beaches.

Not only is Orlando one of the most popular cities in Florida in general, but it’s also a hotspot for marijuana. Orlando is known as a top tourist attraction known for its theme parks, nightlife, water parks, and a lot more. However, medical marijuana patients will also feel right at home here with plenty of dispensaries within close proximity.

Some of the dispensaries you can find around Orlando include MuV, Surterra Wellness, FLUENT, Curaleaf, VidaCann, Trulieve, MedMen, GrowHealthy, and Liberty Health Sciences, among others. No matter what brand you prefer and what kind of products you’re looking for, you’ll be well-served in the Orlando area.

The Orlando City Council also decriminalized marijuana in 2016. Non-medical users will only get a civil citation and a small fine for possession of up to 20 grams. Overall, this city is a great spot for marijuana users as well as being one of the most thriving cities in the state.

While it’s not quite as bustling as Orlando or Miami, Tallahassee is the capital of Florida and it’s no surprise that this is one of the most popular cities in the state for marijuana. Despite its small-town feel, Tallahassee has a large student population as well as being a center for trade and agriculture.

If you’re a medical marijuana user, you’ll find plenty of quality dispensaries in Tallahassee. Some of the dispensaries operating in the city include Liberty Health Sciences, Harvest HOC, GrowHealthy, MedMen, VidaCann, Curaleaf, FLUENT, MuV, Trulieve, and Surterra Wellness. With tons of choices in close proximity, patients won’t find it hard to get the products they need.

The North Florida region is much sparser on dispensaries, so patients from neighboring cities will also find Tallahassee to be a useful hub for their marijuana needs. While it isn’t a tourist hub and doesn’t have the beautiful beaches of some of the other cities on this list, Tallahassee is still one of the best and biggest Florida cities for marijuana.

If you’re looking for a city with plenty of dispensaries, St. Petersburg is another prime spot. The Sunshine City isn’t just good for its beautiful beaches, golf courses, and parks, it’s also one of the most popular cities in Florida for marijuana.

There are plenty of top dispensaries within the area. You can find locations for FLUENT, MedMen, Liberty Health Sciences, Surterra Wellness, One Plant, Curaleaf, RISE Dispensaries, Trulieve, and VidaCann. All of these dispensaries are close to the city and medical marijuana patients can find a wide range of marijuana products in each one.

St. Petersburg is also close to other marijuana hotspots. Neighboring city Tampa has just as many popular dispensaries. Nearby cities such as Largo and Clearwater also have a few dispensaries to offer. However, St. Petersburg is still one of the top destinations in Florida for marijuana as well as being a bustling city in general.

These are some of the most popular cities in Florida for marijuana. However, the state is very marijuana-friendly in general and there are plenty of other top marijuana cities, such as Jacksonville, Tampa, Palm Harbor, Palm Bay, Lakeland, Gainesville, and many others. Overall, you can find quality dispensaries practically anywhere in the state.

Although decriminalization of pot possession is growing throughout the state, you still need a medical card to access marijuana legally. Medical cards allow patients with qualifying conditions to access high-quality medical marijuana products from dispensaries across the state. If you need more information about getting a medical card or want help with the process of getting yours, check out MyFloridaGreen for resources and guidance.