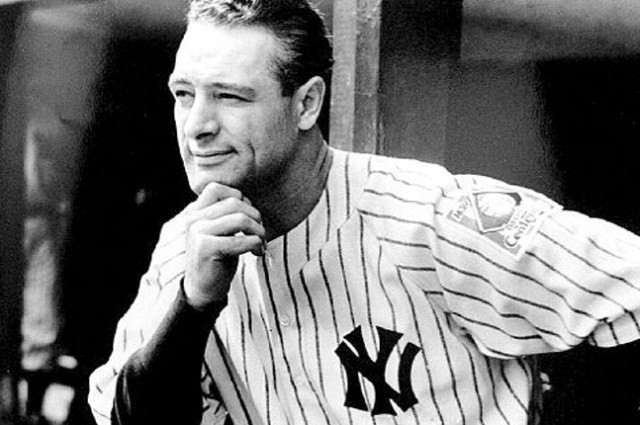 Lou Gherig was diagnosed at the height of his legendary baseball career, at the age of 36. The prognosis was bleak: rapidly progressing paralysis, difficulty in eating and speaking, and a life expectancy less than three years.

“So I close in saying that I might have been given a bad break, but I’ve got an awful lot to live for — Thank you.” Lou Gherig’s Baseball ‘Gettysburg Address’

He died two years later, but left us with his brave, grateful, and graceful legacy.

ALS affects nerve cells in the brain and the spinal cord and it progresses as a result of nerve degeneration. This is known as neurodegeneration — a term that comes up often in the realm of Medical Cannabis (or Marijuana) research.. It causes muscles to waste away as they are no longer receiving nerve impulses and other electrical nourishment.

There are no effective treatments to halt or reverse the progression of ALS. However, there are treatments that help control symptoms and prevent unnecessary complications. One in particular, Riluzole, reduces damage to nerves by decreasing levels of glutamate — an amino acid that plays a key role in the neural pathways associated with learning and memory. This treatment prolongs survival by a few months but does not reverse any damage already done to motor neurons prior to a patient taking the medicine.

THC and CBD are both potent antioxidants (see our recent blog post for more information), according to the U.S. government, which filed a patent on the antioxidant and neuroprotective properties of cannabinoids based on research from 1998. Once again, we encounter the hypocrisies of federal drug policy, which steadfastly maintains that cannabis has no medical value.

In another study entitled, Cannabidiol: a promising drug for neurodegenerative disorders? — done in 2009 by the Department of Experimental Pharmacology at the University of Naples, Italy and sponsored by the NIH, the scientists concluded:

“Nevertheless, among Cannabis compounds, cannabidiol (CBD), which lacks any unwanted psychotropic effect, may represent a very promising agent with the highest prospect for therapeutic use.”

Oxidative stress and the creation of free radicals begins in the powerhouses of cells, known as the Mitochndria. Mitochondrial dysfunction is involved in virtually all disease, especially age-related neurodegeneration.

An estimated fifteen percent of all CB1 receptors in neurons exist on the mitochondria.

According to a 2016 report in Philosophical Transactions of the Royal Society of London:

“Cannabinoids as regulators of mitochondrial activity, as anti-oxidants and as modulators of clearance processes protect neurons on the molecular level… Neuroinflammatory processes contributing to the progression of normal brain ageing and to the pathogenesis of neurodegenerative diseases are suppressed by cannabinoids, suggesting that they may also influence the aging process on the system level.”

“In conclusion, CB1 receptors are localized in the mitochondria of striated muscles in a similar proportion to brain tissue.”

And finally, in promising new research out of Israel, where the endocannabinoid system was first discovered in 1963, scientists found that in people affected by the disease, the muscle secretes toxic free radicals and that in people with ALS, not only was the level of free radical toxicity higher, but there was also an increase in the number of receptors.

In addition, the researchers found that this higher toxicity occurred when there were reduced levels of one specific microRNA (miRs): the miR-126–5p, in ALS models. MicroRNAs are small molecules that regulate the translation of proteins and play an important role in many other cellular processes.

“We demonstrated in lab work and on mouse models that we can successfully ameliorate ALS symptoms using this miR as a potential drug,” Dr Eran Perlson of the Department of Physiology and Pharmacology at TAU’s Sackler Faculty of Medicine, said in the statement. “We further demonstrated that muscle tissue — not only motor neurons — are undoubtedly involved in the progression of ALS.”

“Cannabinoids could also be modulating the expression of miRNAs, a novel class of endogenous, small, noncoding RNAs that negatively regulate gene expression via degradation or translational inhibition of their target mRNAs. MicroRNAs are important regulators of cell differentiation, proliferation/growth, mobility, and apoptosis.” (Zhang, 2008)

We now know, through rigorous government sponsored testing as well as cutting edge research from Israel, that Cannabis has neuroprotective properties and affects cell respiration, fights free radicals and keeps cells from dying. Also, the existence of Cannabinoid receptors has been shown on striated muscle tissues. Putting these important discoveries together with the new thoughts on the synergies of microRNA and Cannabis has huge implications in treating and possibly even curing diseases such as ALS.