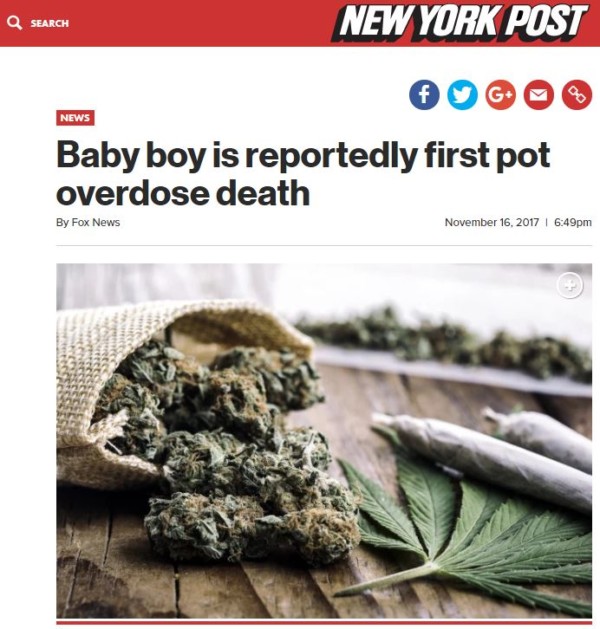 If you were alarmed by recent news regarding Medical Cannabis safety after the tragic death of a child in Colorado you’re the victim of fake news.

Although it is certainly a terrible story, the blame the media is trying to place on cannabis is nothing more than a cheap scare tactic.

Media outlets and journalists who are pushing this narrative are trying to make their advertisers and big pharma backers happy with dirty publicity.

We all talk about how safe cannabis is, but is it as safe as advocates would have us believe? The short answer is yes. Despite slanted stories, cannabis has never killed anyone ever!

For proof here are a few quotes from the doctors involved in the study and others who are aware of it.

“We are absolutely not saying that marijuana killed that child.” Thomas Nappe, Co-author of the study in reference and Director of Medical Toxicology at St. Luke’s University Health Network.

“It would not be correct to go from this to a generalized panic about the lethality of cannabis. It’s just not there. This is not an omen of a disaster to come.” Keith Humphreys Stanford University psychiatry professor who served as a senior policy adviser regarding Medical Cannabis safety at the White House Office of National Drug Control Policy during the Obama administration.

“It’s not based on reality. It’s based on somebody kind of jumping the gun and making a conclusion, and scientifically you can’t do that. You just can’t make those statements because then what happens is lay people say, ‘Oh my God, did you hear a kid died from marijuana poisoning?’ and it can be sensationalized.” Noah Kaufman, a Northern Colorado emergency room physician.

The study that was published stated that cannabis MAY have been a contributing factor in the death of an 11-month-old child. This child had multiple preexisting conditions, and his parents were effectively transients living in a motel with severe drug and alcohol problems. Basically, the headlines are fake news.

Let’s talk about the numbers though. When we compare Medical Cannabis safety to any of its “peers” the evidence is overwhelming. For an average sized adult to overdose on cannabis, or any of its derivatives they would need to take over 15 pounds of active ingredients in under 15 minutes! Getting through 15 grams in that time period is probably impossible.

In pure concentrate form, a patient would need to ingest nearly $20,000 in product. That’s a 2-gallon bucket. If a patient were to smoke or vape it, they would need to fill a 10 foot by 10 foot hermetically sealed room with 100% smoke, and even then, it would be suffocation, not an overdose.

In any reasonable circumstance, no one can overdose on cannabis. It just isn’t feasible without a very specific set of circumstances, and most patients probably don’t have a Mythbuster’s lab in their back yard.

At what point does the FDA’s proclamation become a criminal offense?

If we added other pharmaceutical drugs, the amount of lives that cannabis could save is larger than the total number of Americans lost in every war we have ever fought…combined! That’s millions of Americans every year that could still be living happy healthy lives thanks to a plant.

Cannabis is even safer than baby powder! Yes, that “harmless” stuff designed for our bundles of joy kills an average of 12 people a year, yet cannabis is still at zero. If you’re still concerned about Medical Cannabis safety, here are a few other points to consider:

At this point in a Medical Cannabis safety conversation, most people will start to argue the “gateway drug” argument. Since the numbers are in cannabis’ favor, it’s obvious that this is the next attempt to discredit the modern-day wonder cure. In the last 20 years a litany of studies and examples have shown that cannabis is an EXIT drug, rather than an entrance or “gateway” to harder substances.

It has been found to be non-addictive in any physical way, and has been known to help rewire the receptors affected by opiates and amphetamines. Has anyone ever met a person smoking a joint that suddenly decided meth or crack was a great idea? Unlikely.

Recent studies have even suggested potential for cannabis to fight addictions, and is known to prevent patients from relying on other dangerous medications to circumvent the symptoms from their original medicine. In other words, Cannabis is the only “drug” out there (legal or illegal) that doesn’t need another drug to stop the side effects. Remember, it is a plant that grows from the earth! Compare this to the tragic yet FDA-approved chemicals and side effects offered by Big Pharma.

If we really wanted to dig into Medical Cannabis safety even history is on Team Green. Greeks, Romans, Chinese, Arab, and Native American peoples all have references to cannabis or hemp in their relics. The founding fathers may have grown hemp, and there is evidence of George Washington and Thomas Jefferson chewing on buds to relieve toothaches.

For over 4,000 years cannabis was known as a folk cure, and even the pinnacle of medical value across the world. Until recent decades, the Western world used cannabis as a common cure for a long list of ailments. During this time, the government and corporate interests began producing propaganda that referred to Cannabis as “Marijuana” and portrayed it as an evil “devil plant” for hobos, immigrants, and criminals. They did this because they knew that Cannabis and Hemp would radically disrupt their business models.

If cannabis hadn’t been outlawed, it’s industrial, medical, and recreational uses would have replaced dozens of industries. Hemp can replace plastic, concrete, wood, and nearly any other form of construction material. From paper to socks, and bricks to bumpers, Hemp is a miracle material that grows quickly and doesn’t require harmful pesticides or fertilizers (add another major industry to the hemp hater list!).

So, what is the deal then? If cannabis is so safe, so productive, and so helpful then why is it illegal? To be frank, the answer is right inside the question. Cannabis and Hemp could, and would, replace a series of major industries in America today. It’s obvious as to why corporate interests and the politicians to whom they “donate” are fighting this.