Medical Marijuana for Parkinson's Disease is Breaking Through

Medical Marijuana for Parkinson's Disease is Breaking Through

As Dr. Dorsey says, now is the time of action. To make that action effective and meaningful, we must start by being aware of the current state of our broken perspective on health and the healthcare system.

The recent forecasting estimates for Parkinson’s disease (PD) are staggering. Back in 2013, Dr. Michael Okun, National Medical Director of the Parkinson’s Foundation said:

“If accurate, the numbers suggest an urgent need to WAKE UP and recognize that we are on the cusp of an emerging pandemic.”

Well, the pandemic has emerged. Unlike an “epidemic” — a widespread occurrence of an infectious disease — it is, rather, a high occurrence of a disease spread over a large area. It’s not contagious yet it is escalating far more rapidly than we’d like. Can Medical Marijuana for Parkinson’s Disease be the solution?

Related: Find the Florida Medical Marijuana Doctor Near You

According to the Journal of the American Medical Association,

“Between 1990 and 2015, the prevalence of Parkinson’s more than doubled and it is estimated that 6.9 million people across the globe have the disease. By 2040, researchers believe that the number of people with Parkinson’s will grow to 14.2 million as the population ages and the rate of growth [of Parkinson’s] will outpace Alzheimer’s.”

Ray Dorsey, MD, and colleagues at the University of Rochester Medical Center, a Parkinson’s Foundation Center of Excellence, pointed out in the January 2018 issue of JAMA Neurology that neurological disorders are now the leading cause of disability worldwide. The fastest growing disorder is Parkinson’s disease.

We must become champions for better research to save ourselves, family members, and planet from this disease.

‘Too many people have Parkinson’s today and more will face diagnoses tomorrow. We all — government, patient organizations, researchers, doctors and patients — must work together for better care for those living with this disease and research toward a future without Parkinson’s.”

What Is Parkinson’s Disease?

Parkinson’s disease (PD) is a neurodegenerative (damaging to nerves) disorder that affects predominately dopamine-producing (“dopaminergic”) neurons in a specific area of the brain called the substantia nigra.

Symptoms generally develop slowly over years. The progression of symptoms is often a bit different from one person to another due to the diversity of the disease. People with Parkinson’s may experience:

The cause remains largely unknown. Although there is no cure, treatment options vary and include medications such as Levodopa and Carbidopa (Sinemet). Levodopa (also called L-dopa) is the most commonly prescribed medicine for Parkinson’s. It’s also the best at controlling the symptoms of the condition, particularly slow movements and stiff, rigid body parts. Unfortunately, as you may have experienced, it also comes with a long list of side effects ranging from nausea and insomnia to hallucinations and compulsive addictions.

Dopamine agonists are also important. These drugs act like dopamine in the brain. They include ropinirole (Requip), pramipexole (Mirapex), and rotigotine (Neupro). All of these medications have a host of side-effects and their efficacy fades over time. 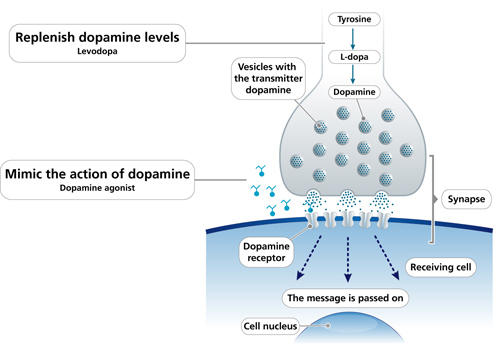 Long-term exposure to dopamine medications, especially dopamine agonists (DAs), can cause a hypersensitivity to dopamine. The body overreacts to this imbalance, and this in turn can lead to an impulse control disorder (ICD) — a group of behaviors that includes gambling, uncontrollable shopping, compulsive eating, a sudden obsession with sex, and excessive daytime sleepiness.

Those are some pretty significant behavioral side-effects.

So we know there’s a problem, and we know that the conventional “solution” often comes with awful side effects. What do we do?

We choose wisdom over fear and propaganda and read what the patients and science proves: Medical Marijuana for Parkinson’s is a safe and effective treatment option.

The researchers and Medical Marijuana Doctors studying Parkinson’s have the proof:

1. The Parkinson’s Foundation offers the very latest research from Benzi M. Kluger, MD, MS, Assistant Professor of Neurology and Psychiatry, Director of Movement Disorders Section at University of Colorado Denver. In his latest (April 2018) “Expert Briefings” webinar sponsored by the foundation, he explained the Endocannabinoid System (ECS) and how it relates to PD:

“Endocannabinoids decrease neurotransmitter release at CB1 receptors and tend to increase GABA and decrease Glutamate and Dopamine release in the basal ganglia, which holds huge promise for PD.”

2. In one study conducted at the Tel Aviv University in Israel (2017), 47 PD patients were observed. During a period of few months, participants used medical marijuana and 82% reported improvement in their symptoms like stiffness and tremor. They also noticed an improvement in non-motor symptoms such as pain, mood, and sleep. (www.ncbi.nlm.nih.gov/pubmed/29059132)

3. The Michael J. Fox Foundation sites these studies as well as a 2014, 22 person study from the Department of Neurology at Tel Aviv University, which found a significant improvement on the motor Unified Parkinson Disease Rating Scale, relief from tremor, rigidity and bradykinesia. There was also significant improvement of sleep and pain scores. (www.ncbi.nlm.nih.gov/pubmed/24614667).

4. Also, in other research in Brazil in 2014, CBD has been shown to help the brain recover from memory deficits caused by excessive iron levels. A 2014 study conducted by researchers from the Pontifical Catholic University of Brazil looked at the impact of CBD and neurodegenerative diseases.

Their results suggest that iron affects mitochondrial (the engines of cells) dynamics, possibly triggering cell death and indicate that CBD should offer memory-rescuing and neuroprotective properties to be used in the treatment of cognitive deficits observed in neurodegenerative disorders. (link.springer.com/article/10.1007%2Fs12035–013–8514–7)

5. Additionally, a 2015 study published in Toxicology In Vitro titled,”The neuroprotection of cannabidiol against MPP+-induced toxicity in PC12 cells involves trkA receptors, upregulation of axonal and synaptic proteins, neuritogenesis, and might be relevant to Parkinson’s disease,” found that cannabidiol protects against the neurotoxin known as MPP(+), which is linked to the damage to the dopamine-producing cells in the substania nigra of Parkinson’s patients. The study concluded that CBD’s neuroprotective properties might be of benefit to Parkinson’s disease patients. (www.sciencedirect.com/science/article/pii/S0887233315300047)

6. Then in 2014, research scientists in Brazil selected 21 PD patients and split them into 3 groups of 7 participants who were treated with placebo, CBD 75 mg/day or CBD 300 mg/day. Increases in well-being and quality of life were observed in the 300 mg/day groups versus the placebo groups. The researchers hypothesized that these improvements may have been due to cannabidiol’s “anxiolytic,” “antidepressant,” “anti-psychotic,” and “sedative” properties. The findings pointed to a possible effect of CBD in improving quality of life measures in PD patients with no psychiatric conditions. (www.ncbi.nlm.nih.gov/pubmed/25237116)

7. Back in 2004, Katerina Venderova (Movement Disorders Journal) conducted a survey of Parkinson’s disease patients on Medical Marijuana and reported the results of 339 respondents with PD. (www.ncbi.nlm.nih.gov/pubmed/25237116)

What’s Next? Parkinson’s, The Gut, and The Endocannabinoid Miracle

The findings were published in February (2018) in Movement Disorders, the journal of the International Parkinson and Movement Disorder Society. UAB’s team is led by Haydeh Payami, Ph.D. Payami’s team studied 197 patients with Parkinson’s and 130 controls.

“This paper shows for the first time a way in which one of the key players in Parkinson’s, the protein alpha-synuclein, may have its actions in the brain modified by gut bacteria. Therapies that regulate the imbalance in the microbiome may prove to be helpful in treating or preventing the disease before it affects neurologic function.” (www.uab.edu/news/research/item/8079-uab-study-shows-link-between-microbiome-in-the-gut-and-parkinson-s).

The Endocannabinoid System is very active in the human gut with many CB1 and CB2 receptors. As the research is proving, Medical Marijuana for Parkinson’s restores gut health homeostasis in many cases. The results of that fact are wide ranging and profound. As the gates of truth continue to creak open and more research is allowed, the possibilities of synergies and treatment are endless.